Honorary title for a Dutch scientist 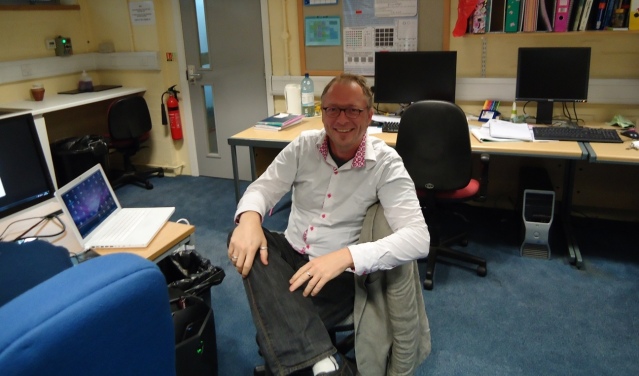 Agur in MB003 in Preston

Dr G.J. Agur Sevink, from a renowned Leiden University in the Netherlands, has accepted an Honorary Readership from UCLan’s School of Computing, Engineering and Physical Sciences.

Dr Sevink holds degrees from the prestigious Dutch universities of Amsterdam and Delf having worked on the mathematical foundations of quantum physics and seismology (the science of earthquakes).

Dr Sevink’s current research interest centres on the mathematics of soft matter. Soft matter encompasses a vast spectrum of materials such as food, health products, cosmetics, plastics, paints, liquid crystal displays and even life itself. The Dutch academic is collaborating on two European projects with Professor Andrei Zvelindovsky and Dr Marco Pinna from UCLan’s Computational Physics Group and the Institute of Nanotechnology & Bioengineering.

Dr Sevink commented: “I think the most fascinating things in modern science are to be found on the border between physics, chemistry and the mathematics of soft matter. New research insights are bringing us closer to answering fundamental questions on how to fight human diseases and even the origins of life itself.”

Dr Sevink’s collaboration with UCLan has been hugely beneficial to undergraduate students.  In 2010 he supervised a month long research project undertaken by Christine Stokes, then a 3rd year UCLan physics student and now a PhD student at University of Manchester.

Professor Zvelindovsky, leading UCLan’s research and teaching in Computational and Theoretical Physics, added: “We are extremely pleased to welcome Dr Sevink as an Honorary Reader of the University. He has already made an invaluable contribution towards the growth of our research at an international level.

“Right from the start of their courses the international dimension to our research enables our undergraduate teaching provision to be truly research-informed and of the highest standard. As a result, our Physics graduates have no difficulty in securing PhD places in some of the UKs most renowned universities.”

Dr Sevink concluded: “I always feel welcome in Preston and look forward to my next visit when I will embark on some exciting new research projects with UCLan.”
In addition to his scientific background Dr Sevink also a keen writer, having published a number of novels and short stories.

Categories: At the top, Press