Abstract. The aim of this work is to investigate the structural and thermodynamic properties of biologically and technological relevant macromolecules when placed at soft interfaces. In particular two amphiphilic macromolecules characterized by different topologies have been investigated namely amphiphilic dendrimers and linear block copolymers. This goal is achieved using a multiscale approach which includes all-atom, united atom and coarse grained models by means of molecular dynamic simulations. 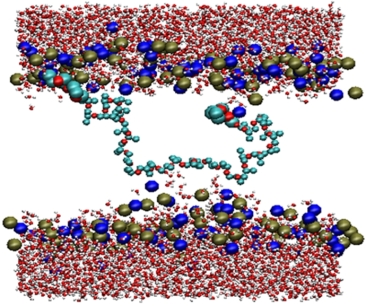 Amphiphilic dendrimers have shown to be promising building blocks for a range of interfacial materials and can be used in applications such as surface-base sensors or surface nanopatterning. In this part by means of all-atom molecular dynamics simulations, we investigated the structure and stability of alkyl-modified polyamido-amide (PAMAM) dendrimers at the air/water interface as a function of the number and the relative position of the modified end groups. We found that the PAMAM dendrimer with all terminal groups functionalized is more stable at the interface than the Janus dendrimer, where only half the amine groups are modified. These results indicate that monolayers of fully functionalized molecules could be as stable as (or more stable than) those self-assembled from Janus molecules.
The second part of this work is devoted to model a particular family of amphiphilic triblock copolymer sold as Pluronics, consisting of poly(ethylene oxide) (PEO) and poly(propylene oxide) (PPO) arranged as PEO–PPO–PEO. There is evidence that this class of amphiphilic materials can be used for different biological applications. A fuller understanding of the molecular mechanisms underpinning their interactions with living cells is essential for ensuring the polymers safety and efficacy in biomedical applications. Using united-atom molecular dynamics simulations and membrane lysis assays, we investigated the relationship between the molecular conformations of a subset of the Pluronic copolymers (L31, L61, L62 and L64) and their haemolytic activity. Our computational studies suggest that the hydrophilic blocks in these copolymers interact with the polar head groups of lipid molecules, resulting in a predicted modification of the structure of the membranes. Parallel membrane lysis assays in human erythrocytes indicate differences in the rates of haemolysis, as a result of incubation with these polymers, which correlate well with the predicted interactions from the atomistic simulations. The computational data thus provide a putative mechanism to rationalize the available experimental data on membrane lysis by these copolymers. The data quantitatively agree with haemoglobin release endpoints measured when copolymers with the same molecular weight and structure as of those modelled are incubated with erythrocytes. The data further suggest some new structure–function relationships at the nanoscale that are likely to be of importance in determining the biological activity of these otherwise inert copolymers.
In order to visualise the effect of Pluronics at a length and time scale closer to the experimental one, in the third part we developed a coarse-grained model for the amphiphilic copolymers within the framework of the MARTINI force-field (Marrink et al., J. Phys. Chem. B, 2007, 111, 7812). The MARTINI force field is usually parameterized targeting thermodynamic properties. In addition to this, we further parameterized it based on atomistic simulations validating the parameters against structural properties of the copolymers. The ability of the model to predict several structural and thermodynamic properties of the atomistic system have been explored. The aim of this work is to be able to simulate the polymer/lipid interface at polymer concentration similar to the experimental one.

View all posts by Manuela Mura