Seminar on the interactions between gravitational waves and planetary rings

In May Dr Phil Sutton presented his ongoing work on the interactions between gravitational waves and planetary rings.

It was discussed that orbital resonances between objects in astrophysical systems is commonplace, with nearby moons creating clear structures in planetary rings. In Saturn’s rings the most obvious is caused by a 2:1 orbital resonance with the moon Mimas (below) in the form of the Cassini Division. By treating gravitational waves as an oscillation of the local gravitational field it can be shown that similar resonant like structures can form in a planetary ring. Due to an orbital period on the order of ~0.5 days in the ring very low frequency gravitational waves were able to be investigated.

The seminar closed on an important idea that the use of astrophysical objects as detectors might open up new parts of the elusive gravitational wave spectrum, and subsequent new areas of fundamental physics to be studied. 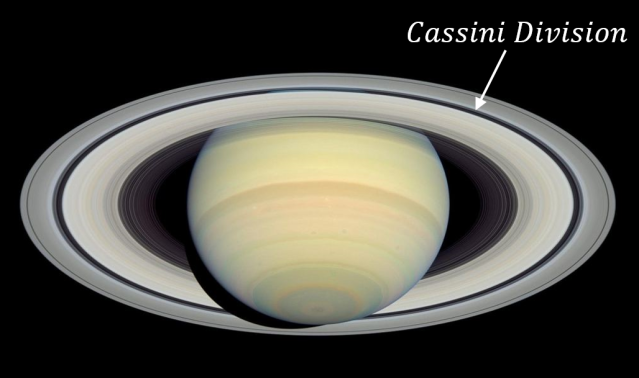 Lecturer in Astrophysics at the University of Lincoln. My research interests include the computer modelling of planetary rings. This includes the very dynamic F ring at the edge of Saturn's rings which interacts with nearby moons on very short time scales. The investigation of planetary rings can help us understand more about planet and moon formation. An potentially interesting case comes in the form of circumbinary exoplanets we have recently discovered like Kepler-16b. These large gas giants are capable of harboring Earth sized moons around them. Yet how might they form? Looking at planetary ring stability around such exotic exoplanets might help us understand more. View all posts by Phil Sutton