Published articles helping to reveal secrets of the nano-world 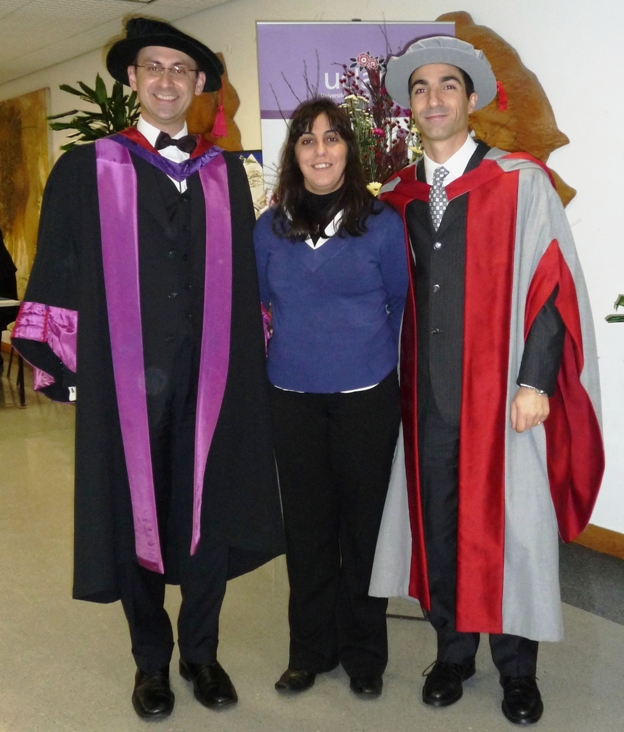 From right to left: Marco, Manu and Andrei

Dr Marco Pinna, who graduated from UCLan in November with a PhD in Computational Physics, celebrated a double success this year.

His final paper, which was published by the Journal of Chemical Physics just two days after his graduation, was also selected for the Virtual Journal of Nanoscale Science & Technology less than a fortnight later.

The Virtual Journal, published by the American Institute of Physics and the American Physical Society, is an edited compilation of articles covering a focused area of frontier research.

Marco, whose expertise is in using supercomputers for discovering laws of the nano-world, explained: “I did not know about Preston before moving here. After obtaining my undergraduate degree in Italy I had several options to continue as a research student in several EU countries. I was impressed by UCLan’s very swift application procedure and the friendliness of UCLan staff. I also liked the informative web-pages of the Computational Physics group, and decided that this was the place for me.

“I was offered excellent working conditions here, including almost unlimited access to a local supercomputer, much to the envy of some of my student friends from other top universities. During my PhD I was given the opportunity to present my results in countries from Japan to the USA, and to collaborate with world-leading groups in several countries. Now I’ve graduated, I’m delighted to continue my research at UCLan as a Research Associate on an EU project involving four countries.”

Professor Andrei Zvelindovsky, UCLan’s Chair in Computational & Theoretical Physics and Marco’s PhD supervisor, comments: “We are committed to providing our students with a world-class research experience; it’s something that always pays dividends for the University. For instance, Marco developed a unique computer program to study the self-organisation in the nano-world (the world on the scale of one billionth of a metre). Now his work is attracting interest from many organisations including Cambridge University, which is looking to collaborate with us.

“Marco’s research also helped us to secure several grants, the most recent being £55,000 from UCLan’s Research Equipment Development fund to build the (Bio)-macromolecular visualisation suite. There was very strong competition from another 30 bids, which totalled £1.7m against an available fund of £0.5m. We are very pleased with this outcome which will allow us to create 3D movies of the life of molecules in the nano-world.”

Nano scale technology is so small it is invisible to the naked eye, being roughly 100,000th of the width of a human hair. Visualising their structures is essential as they occupy a world hugely different to our own; when a molecule moves an inch it is equivalent to a human walking to the moon.

As the science of the very small develops, the applications for nano technologies are expected to lead to a new era in medicine, travel and electronics.

News update
Marco has just won his third grant from High-Performance-Computing-Europa to work on one of Europe’s largest supercomputers in Barcelona.