Starlings above the University of Central Lancashire in Preston. Photo: C. Stokes (January 2011)

Large systems of self-propelling particles (SPP) form a special class of so-called active matter. Examples of such systems found in nature are: flocks of birds, schools of fishes, ants, groups of bacteria, etc. One can often see how these animals develop coherent motion, amazing the observer by the diversity of its forms and shapes. A reason that these systems are interesting for physicists is that many aspects of the observed transition from disordered to ordered motion are as yet not fully understood. 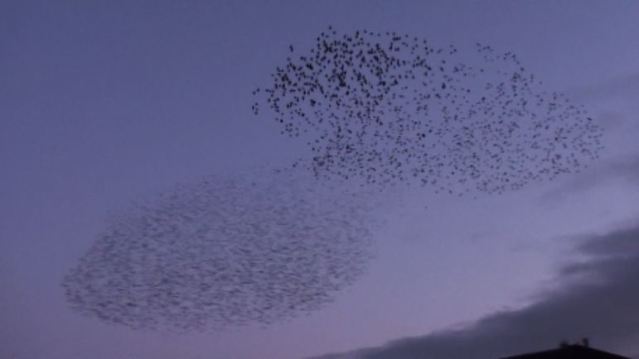 Starlings above the University of Central Lancashire in Preston. Photo: C. Stokes (January 2011)

The collective motion of SPP is driven by the presence of so-called kinematic (or nonholonomic) constraints, which are imposed on the orientations of the velocities of the particles. These kinematic constraints can be considered as an interaction of a nonpotential character. Thus the usual methods of Hamiltonian dynamics cannot be applied to study the behaviour of SPP.

The general aim of this project  is to construct models (analytical and computational) to describe the collective
behaviour of self-propelling particles observed in nature and compare them with some of our own “experimental” measurements (see examples on the images).